Book chapter
How languages with the dual differ from the others: The case of numeral-noun constructions

Kira Droganova tells about her talk on TLT14 (Warsaw, Poland) 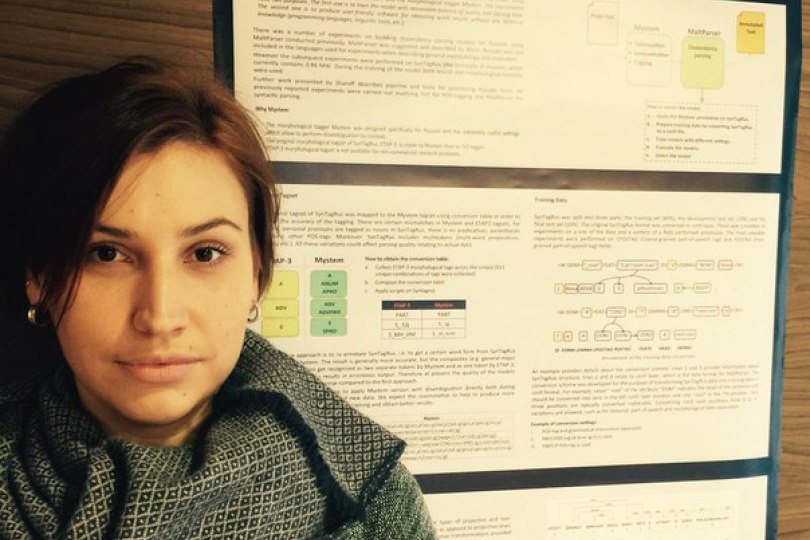 Kira, a master student at the School of Linguistics, wrote a short piece about her experience at the 14th International Workshop on Treebanks and Linguistic Theories (TLT14).
Research&Expertise
December 29, 2015

Winners of the Golden HSE Announced

On December 23 the winners of the Golden HSE Awards were announced. The jury selected the winners in each of the main categories: Achievement in research, Contribution to the development of HSE, For kindness and personal involvement, Achievement in teaching and Alumni success in academic activity. Winners of the Silver Nestling were also announced during the ceremony.
On Campus Golden HSE
December 23, 2015

Natalia Slioussar, Associate Professor at the School of Linguistics was member of the organizing committee of the Winter Workshop on Experimental Studies of Speech and Language ‘The Night Whites Language Workshop’ that was held on December 18-19 in Saint Petersburg. Natalia Slioussar also presented a poster report and delivered a speech during the event.
Research&Expertise research projects Reporting an event
December 22, 2015

Alessia Benedetti: Internship at the School of Linguistics

Alessia, a master student at the University of Bologna (Italy), tells about her experience at the School of linguistics.
December 22, 2015

The HSE School of Linguistics, along with Samsung Electronics and experts from the group Tolstoy Digital, has launched the web version of the project ‘Living Pages,’ which offers users a new visual and linguistic analysis of Leo Tolstoy’s iconic novel War and Peace.
Society Leo Tolstoy literature
December 11, 2015

Students of the School of Linguistics to Take Part in ATTEST

Anna Vechkaeva and Anna Novosyolova, 4th-year students of the School of Linguisitcs, will take part in the international research conference ‘Approaches to the Editing of Slavonic Texts. Tradition and Innovation in Palaeoslavistic Ecdotics’ (ATTEST) that will be held at the University of Regensburg on December 11-12. The students will present the report ‘The Dictionary of the Russian Language of the 11th-17th cc. as a Database: Information Retrieval and Research Perspectives’. The report is co-authored by the School lecturers Marina Bobrik-Froemke, Roman Krivko and Boris Orekhov.
Research&Expertise students research projects Reporting an event international conferences
December 09, 2015

She gave a talk entitled "Russian experiencer verbs: Semantics-Syntax interface". She also delivered an invited lecture at the Center for Russian Studies at Harbin University on November 12.
Research&Expertise Reporting an event
December 01, 2015

From November 14 - 24th a series of lectures on 'Diversity and Uniformity in Linguistic Sound Systems' by Ian Maddieson, Adjunct Research Professor at the University of New Mexico, Adjunct Professor Emeritus at the University of California was held at the HSE School of Linguistics. The course was dedicated to the phonetic diversity of languages and included eight lectures. During the series, Professor Maddieson talked to HSE English News Editor, Anna Chernyakhovskaya’s questions about his research into the relations between language and environment.
Research&Expertise HSE guests linguistics
November 25, 2015
1 2 3 4 5 6 7 8 9 10 11 12 13